In 2002, the Rafto Prize was awarded to the Saharawi symbol of freedom and liberation, Sidi Mohammed Daddach. At the time, he had endured more years in prison than outside. Six years on, he finds himself under constant surveillance, and Western Sahara still under Moroccan occupation. Rafto Foundation, December 15, 2008.

On December 5th 2008, a petition letter signed by 426 organisations was sent to the EU commission demanding that occupied Western Sahara be kept outside of the Morocco-EU socalled Advanced Status cooperation. Do you wish your organisation had signed, but did not make the deadline?

No less than 426 organisations signed a petition letter, demanding from the EU Commission that occupied Western Sahara be kept clearly outside of the so- called Advanced Status cooperation that Morocco currently is being granted. The petition was sent to the EU Commission this morning. PRESS RELEASE December 5th 2008.

Amnesty International fears that Mustafa Abdel Dayem's conviction may have been intended to punish him for his public support for the right to self-determination for the people of Western Sahara. Reat statement 23rd of December 2008.

The fertilizer company Yara remains under investigation by Norwegian police after having purchased a shipload of phosphates from occupied Western Sahara.

The Executive Board of The Liberal Party of Norway demands that Western Sahara be excluded from EU's cooperation with Morocco.

Living as an outsider in your own country is like a nightmare. But for Saharawis like Hassan and Aminatou, it is a reality, and they fight for self determination because "This is our land". Sunday Tribune, October 12, 2008.

Clips taken in May 2008 at the Agadir university.

The Seoul Peace Prize Committee has today announced that this year's prize is awarded to the president of the US based Defense Forum Foundation, Ms. Suzanne Scholte, for her work on the peoples of Western Sahara and North Korea.

"A full reading of the Court's entire opinion shows that the ICJ was very clear that the sovereign power in Western Sahara was and is the native Western Saharans. The purpose of a self-determination referendum in Western Sahara is not to decide between competing sovereignties, whether Moroccan or Sahrawi". PhD Candidate Jacob Mundy, goes through the opinion of the International Court of Justice, from 1975.

The Bergen-owned shipping company Gearbulk is participating in the plunder of Western Sahara and is contributing to maintaining the occupation of “Africa's last colony”. Read op-ed in the Norwegian newspaper Bergens Tidende, 29 June 2008,

Namibian-South African fishing company setting up in occupied WS
Not many years ago, Namibia was occupied by neighbouring South Africa. At the time, the Security Council imposed legal sanctions on foreign investments and trade in occupied Namibia. On Thursday, South African SABC TV revealed that Namibians and South Africans are fishing in occupied Western Sahara.
Published 17 July 2008

The EU Commission has admitted that EU vessels fish in Western Sahara, occupied by Morocco. Western Sahara Resource Watch demands an immediate halt to the fishing, until the agreement has been corrected to clearly exclude the territory offshore Western Sahara.

Some Money Smells Too Bad
"It is surprising that mainly Bergen-owned Gearbulk sails for the occupying power Morocco". Read here editorial in one of Norway's biggest newspapers, Bergens Tidende, 29th of June 2008.

Air photo of the berm

Check out this new photo taken of a section of the Moroccan fortification structure extending all through Western Sahara.

PRESS RELEASE: 29 parliamentarians from UK, Norway and New Zealand this morning sent a letter to the shipping company Gearbulk, urging the company to stop their phosphate shipments from occupied Western Sahara.

Sidi Mohammed Daddach, winner of the Rafto prize, was stoned and beaten senseless in Western Sahara yesterday. Birgitta Ersland, from Bergen, was right in the middle of the tumult. Bergens Tidende, 17 June 2008. 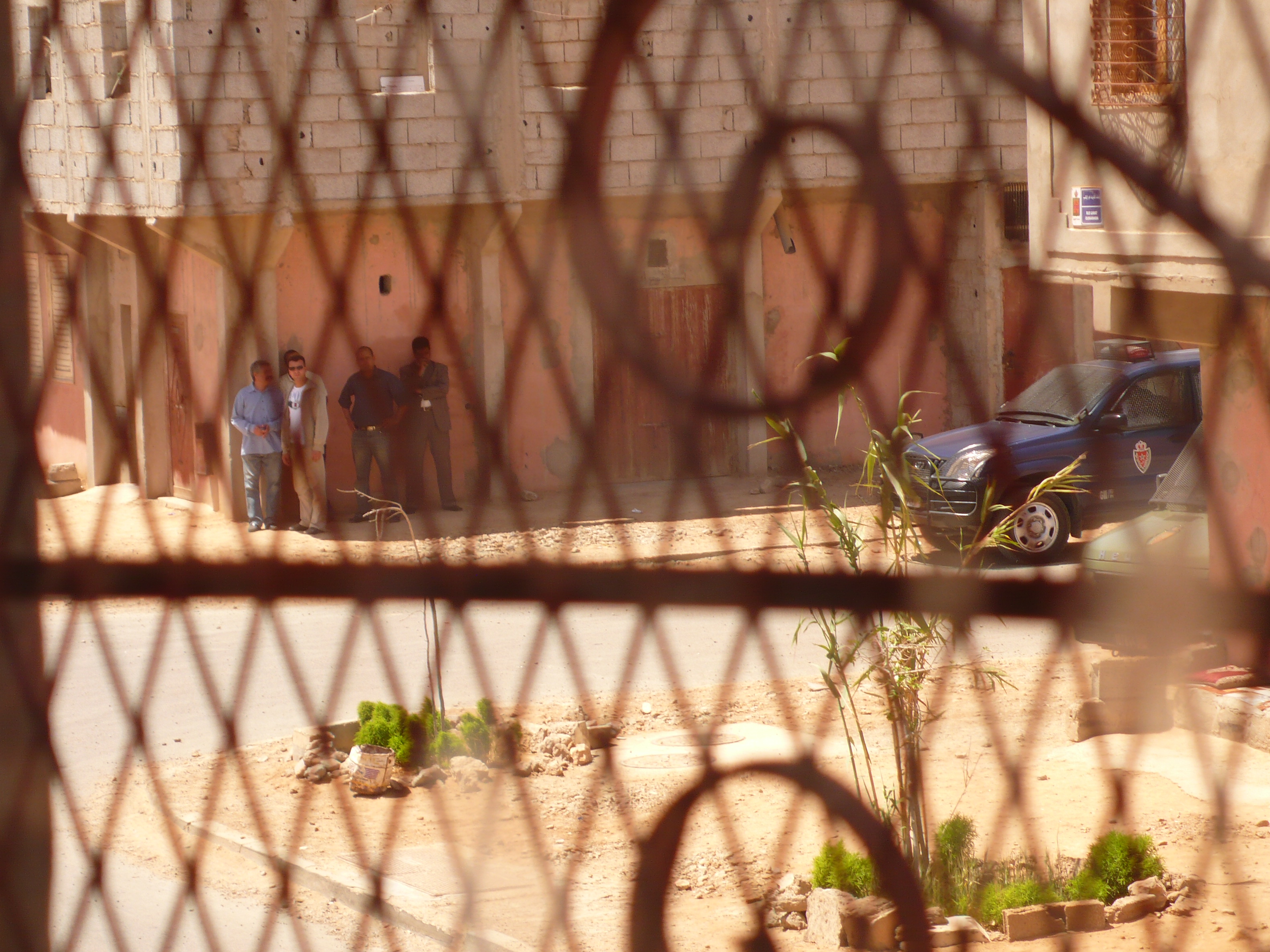 Human rights defender Brahim Sabbar was released from jail yesterday. When coming home, his house was put under heavy surveillance. Check out some photos taken today, out of his window in El Aaiun.

Sahrawis in Norway are asking Bergen-owned Gearbulk shipping company to stop trading with Western Sahara. They believe such trade maintains the brutal occupation.

Three Norwegian shipping companies have apologized and stopped their operations in occupied Western Sahara. However, the Bergen-owned company Gearbulk continues their controversial transports. Next week, yet another Gearbulk vessel is due to arrive in a New Zealand harbour with phosphates. The Norwegian Support Committee for Western Sahara argues that the Sahrawi population has suffered a financial loss amounting to 200 million USD, as a result of the shipments of this shipping company alone.

Stowaways from El Aaiun caught in Latvia
3 stowaways -probably Moroccan- are now in police custody in Norway after arrving in port of Horten, Norway on 3rd of June. They had hidden in a vessel with fish meal from El Aaiun in occupied Western Sahara, and were discovered as the vessel discharged its cargo in Latvia.
Published 13 June 2008

SCMP: A line in the sand
Built to keep the Sahrawi from their own land, the berm that bisects Western Sahara is a potent symbol of Morocco's determination to hold on to Africa's last colony in the face of long-standing - but weak - international pressure. Ivan Broadhead reports. South China Morning Post, 11th of May, 2008.
Published 05 June 2008

The third 'Norwegian' shipping company in half a year says it will not longer visit ports in occupied Western Sahara. Jinhui Shipping, registered on Oslo Stock Exchange, says to South China Morning Post that it will not contract any more business in the country.

The appeal trial of Naama Asfari was supposed to take place Monday. Court accepted to postpone the appeal trial until 16th of June -two days after Asfari's 2 months prison term ends. A team of European lawyers and observers was present for the trial.

The Norwegian shipping company R-Bulk apologizes that one of their vessels has transported phosphates from Western Sahara, and say they will do their utmost to prevent it from happening again.

In violation of international recommendations, 15.000 tonnes of phosphates have been transported from Western Sahara to Colombia.

Check out this footage of Moroccan forces surrounding the University campus in Marrakech, and later throwing teargas into the campus. Sahrawis are injured, and flee the campus.

A number of Saharawi students were injured when Moroccan police stormed into student homes in Marrakech.

Importing handicrafts from the refugee camps
The Norway-based Red Cross Nordic United World Colleges has opened a business to import artefacts from the Sahrawi refugee camps in Algeria and market them in Norway and Scandinavia.
Published 24 May 2008

Detained and dumped outside of town
Leader of the El Aaiun branch of the Moroccan Association of Human Rights, Mr. Iguilid Hammoud, was, on May 10th, detained by the police, interrogated and then released outside of town.
Published 12 May 2008

One out of five Sahrawi children who have grown up in refugee camps in Algeria are suffering from acute malnutrition. A report that will be published by the Norwegian Church Aid next week shows that the health of Sahrawi children now are severely affected by the lack of humanitarian aid.

The Norwegian insurance company, Skuld, keeps insuring ships carrying controversial cargo. After the case of the ship carrying weapons to Zimbabwe, it has now been discovered that Skuld has ensured a ship carrying phosphate from occupied Western Sahara.

The Australian Western Sahara Association reacts to a new shipment of phosphate that this week-end arrived Tasmania. May 6th, they sent a letter to the company demanding the imports to stop.

Western Sahara among the world's most repressive societies

In a report launched May 6th 2008, American NGO Freedom House rates the situation for political rights and civil liberties in the occupied Western Sahara on the same level of countries such as Saudi Arabia, Zimbabwe and Belarus.

Before the court today

Enaama Asfari (right) is dreaming of returning to his home in France. But first he would have to win in court. Monday 28th of April, he is appearing before the court in Marrakech.

Last week, Haddi Yarba, a Sociology student was struck on the head with a stone. Now he has problems finding the words.