Support us
Importing handicrafts from the refugee camps

The Norway-based Red Cross Nordic United World Colleges has opened a business to import artefacts from the Sahrawi refugee camps in Algeria and market them in Norway and Scandinavia.
Published 24 May 2008


The Red Cross Nordic United World Colleges (RCUWC) handicraft project in the Sahrawi camps is progressing. Check out this story below posed by the team at the college.

UB Sahrawi is a non-profit company based in RCNUWC which was established under the umbrella of YYA (Norwegian Young Entrepreneurship). Our main aim is to develop a production in Western Sahara refugee camps, to help the refugees make their traditional hand craft and make an income. UB Sahrawi markets inside and outside Norway artifacts and other objects to be produced in the Sahrawi camps, in order to provide purposeful activities, and a source of income for these producers. At the beginning, we decided to focus on the production of stone jewellery. 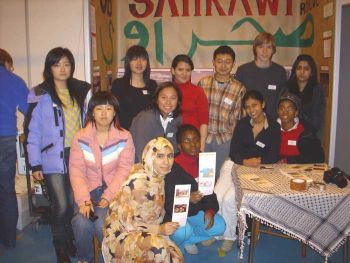 With the help of YYA, we managed to avoid almost all the bureaucratic hindrances so starting was not very hard. All the Norwegians helped a lot in this process. Then, we organized the structure of the company by dividing it into three sectors: marketing, finance and production. Each of these is led by a director who is responsible to report everything to the managing director. The responsible for the meetings is the chairman.

As part of the project promoted by YYA, we took part in a fair in Førde; so our main occupation right after Christmas break until February was preparing this event which would help UB Sahrawi sell its ideas and attract some potential interests. We prepared a presentation about our company, we printed business cards and we made all the decoration for our boot. During the fair, our general impression was positive. We spent the whole day advertising the company by distributing business cards and other informative material. We also gave our presentation to the organizers of the event. One of the most positive aspects of this day was the possibility to compare our company with others, and also get further ideas and learn from other successful companies as examples.

Afterwards, we contacted and met with Jacob a few times , who is a local artist specified in making stone-jewels. This is to evaluate and understand how producing stone jewellery is in order to find the possibility of producing such products in the camps. We invited Jacob to dinner and we went to his laboratory to see how he works; moreover, we had the possibility of ascertaining the costs of producing stone-jewellery. However, due to some of the limitations and the fitness of our business ideas, we decided switch from producing the stone jewellery. After long but constructive discussions we decided that the production of camel-skin bags and bracelets would be better because it is far less costly. We made a very vague draft of the product to let the people in the camps express their creativity. We are planning to import some bags and bracelets at the beginning of next fall in order to start the marketing. In the mean time, UB Sahrawi has also made a large donation of Kr 20,000 to DROP to help Raselas School in Ethiopia.

By next term, we will be getting our first products from the refugee camps, and we will be marketing it as widely as possible to achieve our business ideas and to benefit the initial producers.