One out of five Sahrawi children who have grown up in refugee camps in Algeria are suffering from acute malnutrition. A report that will be is_is_published by the Norwegian Church Aid next week shows that the health of Sahrawi children now are severely affected by the lack of humanitarian aid.
Published 08 May 2008


The UN is_is_published in December 2007 a report on the situation in Darfur. According to the report, 16.1 percent of the children affected by the war in Darfur were acutely malnourished, compared with 12.9 percent the year before. "For the first time since 2004, the malnutrition rate, a gauge of the populations overall distress, has crossed what United Nations officials consider to be the emergency threshold", wrote the New York Times. The treshold for the UN is 15 percent.

But in the less known Sahrawi refugee camps in Algeria, inhabited by the indigenous people of Western Sahara, the emergency is even more acute. 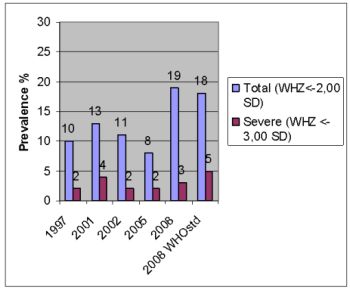 The Norwegian Support Committee for Western Sahara can now present the preliminary results of a study conducted in March-April this year in the refugee camps in Algeria. The study is to be officially launched next week.

In the table on the right, you see how the malnourishment has developed among Sahrawi children over the last decade.

The findings of the new report, displayed as "2008" in the diagram, shows that the number of malnoutrished children (between 6 and 59 months old), has more than doubled in 3 years; from 8 percent in 2005 till 19 percent today.

The column to the far right, is a study that was recently carried out by WHO, which confirms the same results.

The study also shows that 3 percent of the children are severely malnourished.

The aggravation of the health situation follows a decrease in humanitarian aid to the Sahrawi refugees.

The study is commissioned by the Norwegian Church Aid - Norway's biggest humanitarian organisation - together with the Spanish organisation Medicos del Mundo. The study involved samples of health of children and women in all the 4 Sahrawi refugee camps.

In order to have a representative sample of the Sahrawi refugee population, the researchers established that they needed a population of 853 children in the age of 6-59 months, and 651 women of childbearing age (between 15 and 49 yrs). The study has fulfilled these criteria.

The Western Sahara food ends up elsewhere
The Sahrawis are indigenous to Western Sahara, a country that was occupied by Morocco in 1975. Since then, a majority of the population has fled to refugee camps in the Algerian desert. The Moroccan occupation was condemned by the UN, and was followed by a war between Morocco and the liberation movement Polisario until a peace agreement was signed in 1991. The agreement established that a referendum was to be arranged in 1992, something that the UN has worked to implement.

But the referendum has been stalled repeatedly, due to repeated Moroccan objections, and has still not been arranged. In the meantime, Morocco has been selling the natural resources of the occupied land to foreign states, the major resources being phosphates and fish.

Ironically, while some states say they support the UN efforts to decolonise the territory, they purchase the fish and resources from Morocco - resources that belong to the Sahrawi people. Hear for instance interview with New Zealand Minister of Trade, Phil Goff, on Radio New Zealand earlier today. Goff has been told by the Moroccan government that the Sahrawis benefit from the fishing.

The report launched next week proves he is wrong.