Support us
Stowaways from El Aaiun caught in Latvia

3 stowaways -probably Moroccan- are now in police custody in Norway after arrving in port of Horten, Norway on 3rd of June. They had hidden in a vessel with fish meal from El Aaiun in occupied Western Sahara, and were discovered as the vessel discharged its cargo in Latvia.
Published 13 June 2008

When the vessel 'Soul Sound' arrived port of Horten, Norway, on 3rd of June, it carried 3 stowaways that were immediately detained by the local police.

The story has been covered in Norwegian media. What is not mentioned anywhere, is that the vessel actually carried fish meal from occupied Western Sahara.

The fish meal industry in occupied Western Sahara is a big business, employing mostly Moroccan settlers who have moved illegally into the territory.

'Soul Sound' loaded fish meal in the harbour of El Aaiun probably around 17th of May 2008. It is not known by Western Sahara Resource Watch who the exporter were.

Nor is it known who imported the meal. The vessel arrived the port of Ventspils, Latvia on 29th of May and Klaipeda, Lithuania, on 1st of June. 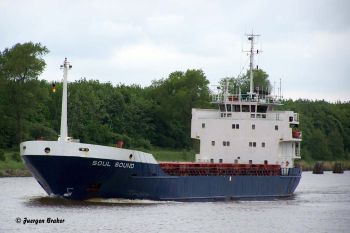 The photo on the right is from the Kiel Canal, and taken on 26th of May 2008, when she was on the way to Latvia, and with the 3 stowaways still secretly on board.

The meal seems to have been discharged in Latvia. The harbour authorities in Horten, Norway, have explained to the Norwegian Support Committee for Western Sahara that only steel was on board when the ship came to Norway.

Unknown identity
The stowaways are now detained by the police, since their identity remains unknown.

One of the men has seeked asylum in Norway. The police has received information that one or several of them have already been expelled from Frankfurt, Germany, to Casablanca, Morocco, on 7th of January this year. It is still unknown whether this is the case also for the two others.

The newspaper Tønsbergs Blad has followed the story since the arrival of the stowaways to Norway. According to one one of the immigrants, and the captain of the vessel, the 3 stowaways had hidden in a cargo room onboard, filled with fish meal. When they went on shore in Latvia, they were discovered by Latvian police.

The reason why Latvian police discovered them, was their strong odeur of fish meal as they came on land. Since the Latvian police knew 'Soul Sound' had fishmeal on board, they decided to check the cargo rooms. In one of the cargo rooms in the back of the vessel, they found food clear traces of someone having lived there for days, according to Tønsbergs Blad.

When discovered, they were sent back on to the vessel, who later founds its way to Norway.

"Many things indicate that they are Moroccan, but we are not entirely sure yet", said police attorney Rina Stokke to Tønsbergs Blad.

'Soul Sound' (IMO number 8215792) is a 1983-built cargo ship, owned by Spectrum Shipping Ltd on Malta. After offloading the steel and the stowaways in Horten, the vessel continued towards Denmark.