Open letter to the Moroccan government

Stop the attacks on the Sahrawi students!

We, the undersigned organisations would like to express our most profound concern over the human rights situation in Morocco and the occupied territories of Western Sahara , particularly for the Sahrawi youth and students.

Sahrawi students at universities and campuses all over Morocco and Western Sahara have since May 2nd this year been attacked in unprecedented ways by Moroccan police and armed mobs. According to leading Western Sahara human rights organisations, Moroccan and international press, witnesses on the scene and the victims themselves, dozens of Sahrawi students have been detained and arrested, while many more have been injured. It is also reported that some of the attacks involve severe beatings and sexual abuse, as well as harassment of hospitalised victims. Sahrawi students' living quarters have been ransacked and thrashed by the police and the mobs. The Moroccan police have on several occasions, while carrying out the violent aggressions, pronounced discriminating statements towards the Sahrawis, referring to their political aspirations for an independent Western Sahara.

The worst incident so far was the case of the student Sultana Khaya, who on May 9th peacefully called for the release of some of her fellow students. She was, however, brutally beaten up by the police, leading to the loss of her right eye and severe bruising of her body. See some of the photos here: http://www.vest-sahara.no/?cat=1&art=459. It is also regrettable that this aggression towards the Sahrawi students occurs at the moment when they are in the final preparations for their exams, scheduled for the beginning of June.

In our assessment, the Sahrawi students are now victims of a form of unprecedented double aggression. Not only is their physical security seriously threatened by these attacks, but their very future is also threatened by this very abrupt disruption of their studies.

We would like to stress that all students, be they Moroccan or Sahrawi, have a legitimate right to freedom of expression, movement, association and assembly and that the Moroccan government has a duty to respect and protect those rights.

Reports from human rights organizations and the media strongly indicate that the Moroccan authorities have not shown due respect for those rights and have discriminated against Sahrawi students by the use of brute force, arrests and politically motivated charges.

Since the Moroccan invasion of Western Sahara in 1975, the Moroccan state has systematically violated international law, the resolutions of the United Nations and the Geneva Conventions by refusing the Sahrawi people their right to self-determination, by importing several hundred thousand Moroccan settlers into the occupied territory and by crushing opposition to the occupation through imprisonment of thousands, and the forced "disappearance" of some 520 Sahrawis.

As the protest of the Sahrawi students have been centred on the right of the Sahrawi people to self-determination and freedom from occupation, it is important to remember that this right has been established through numerous United Nations Security Council and General Assembly resolutions, as well as in the accords signed between Morocco and Front Polisario. According to the 1991 peace plan, the Sahrawis were to choose between independence and integration in a free, fair and transparent referendum. 16 years later, the agreement has still not been implemented. The Moroccan government today openly rejects these previous agreements, thus undermining the UN's efforts and continuing to violate international law.

The growing and quite understandable frustration and despair witnessed among Sahrawi youth and students today, and the brutality with which the Moroccan police chooses to respond to it, risk causing further conflict, violent confrontations and disruption in both Morocco and Western Sahara. We therefore strongly urge the Moroccan authorities to do its outmost to protect the rights of all students enrolled at Moroccan universities, particularly the Sahrawi minority, by: 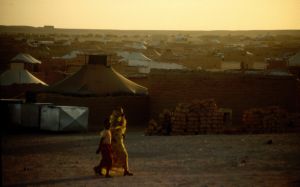