Remarks by Mikael Simble,
Representative of the Norwegian Support Committee for Western Sahara

First of all, I would like to thank you for letting me address you here today on behalf of the Norwegian Support Committee for Western Sahara. For us, the respect for international legality and Human Rights is fundamental for the successful resolution of any international conflict.

Unfortunately, not all governments support these norms. At least, they are not quite willing to let their actions be guided by them when it comes to Western Sahara. As this distinguished audience is well aware of, there is a large number of United Nations rulings, opinions and resolutions confirming Western Saharas status as a Non- Self-Governing territory and the illegality of Moroccos continued occupation. Examples of such are the ruling of the International Court of Justice in October 1975 and the opinion of the United Nations Under-Secretary-General Hans Corell in 2002. Nevertheless, states like France and the United States continue to give political and material support to Moroccos continued occupation of Western Sahara. That has to stop.

Likewise, several private and state-owned companies from many countries consciously collaborate with the Moroccan occupier in exploiting the rich natural resources of western Sahara, brushing aside protests from the Saharawis themselves, the international solidarity movement and sometimes their own governments that they are in violation of international law and that theyre supporting and paying for a brutal and illegal occupation.

We believe that these attitudes and acts seriously undermine the efforts of the United Nations to resolve the conflict over Western Sahara, they undermine our common security and will be a source of shame for those countries and companies as the history of the liberation of Africas colonies is finally written.

That is why the Norwegian Support Committee for Western Sahara in August of this year felt compelled to report the Norwegian fertilizer company Yara International to the Norwegian police for dealing in stolen goods. Contrary to their own earlier promises and advice from its largest owner, the Norwegian government, Yara had once again imported Western Saharan phosphates to their processing plant at Hærøya, Norway.

Other Norwegian-owned companies such as the shipping company Gearbulk and the fishing company Sjøvikgruppen have so far resisted calls to cease their exploitation of Western Saharas resources but both they and other foreign companies can expect increased outside pressure in the times ahead.

Another example, is here in United States. Yesterday, on October 8th, a bulk vessel full of phosphates from occupied Western Sahara will arrive at a port in Tampa, Florida. The local importer, fertilizer producer Mosaic Co, must have paid the Moroccan state phosphate company around 15 million USD for this one single shipment. That equals half of the entire multilateral aid to the refugee camps in Algeria. This week has also seen similar shipments arriving Belgium and Bulgaria.

At the same time, this and last week, Sahrawis in Western Sahara have taken to the street to protest this industry. Yesterday, there was a demonstration in Western Sahara against the Irish oil company Island Oil and Gas which is exploring for oil for the Moroccan government, in disregard of the mentioned UN legal opinion from 2002.

We take this opportunity to repeat our call on these companies, their shareholders and the governments represented here to put an end to these highly unethical and unacceptable activities.

Mr. Chairman,
Of a long list of concerns for the treatment of Saharawis under occupation and the sorry plight of the Saharawi refugees, we are particularly touched by the fate of the Saharawi Human rights defenders. These Human rights defenders are
particularly singled out by the Moroccan forces for harassment and maltreatment and often end up as political prisoners in the infamous "Black Prison" in El Aaiun or around Morocco. As has been documented and denounced by Saharawi, Moroccan and international Human Rights organizations, the majority are subjected to prolonged interrogation and some or all of the following Human Rights violations when detained: beatings, torture or other degrading treatment, rape, threats of rape or murder, forced feeding or injections when on hunger strike, isolation and deportation to Moroccan jails.

Among them are shining examples of dedication to the cause of liberation, tolerance and dignity, like Ms. Aminatou Haidar, recognized through several human rights prizes such as the Robert F Kennedy Memorial award this month. Other activists that deserve mention are Brahim Noumria, Sidi Mohammed Daddach and so many others who have suffered forced disappearance, torture and many years of imprisonment under subhuman conditions at the hands of the Moroccan occupiers.

It is important that the participants of this forum understand that the fate of these Saharawi human rights defenders- often political prisoners- is crucial to the success of the efforts of the United Nations in Western Sahara. I will mention three reasons for that:

1: they are actually doing the job of the United Nations. They are the ones who most actively promote the implementation of the UN resolutions in Western Sahara, and they do so through peaceful means,

2: through their courage, dedication and readiness to sacrifice their freedom and even their own lives they are defending concepts under great pressure globally, such as respect for human rights, respect for international law and negotiated peace agreements and the inviolability of inherited colonial borders.

3: through their peaceful work, based squarely on the respect for Human Rights and international legality, they lay the foundations for future peaceful coexistence between a decolonized Western Sahara and Morocco, thus hoping to avoid that the conflict returns to the agenda of the UN Security Council and the Fourth Committee.

Mr. Chairman,
There should be no doubt that most Saharawis, both under occupation and in exile, are determined to continue struggling for their inalienable right to self-determination. In this situation, Morocco has two options: either to continue to brutally suppress any hint of dissent and protest in Western Sahara through arrests, torture, killing and "disappearances" - or to start going down the path of respect for Human Rights, democracy and international legality. Until today, Morocco has obstinately followed the path of oppression and further continued violation of international law.

It is therefore high time that the international community, represented by the United Nations, tells Morocco that enough is enough. Countries like France and the United States must place respect for international law and the freedom of others before their own interests. Continued Moroccan occupation of Western Sahara not only threatens the peace and stability of the entire Maghreb region but it also undermines the ability and credibility of the United Nations as an arbiter in international conflicts. Foreign companies that collaborate with the Moroccan occupier must understand that high ethical standards and corporate social responsibility will set them apart as the companies of the future rather than the past.

While the international community is procrastinating and debating the issue, the Saharawis are paying with their freedom, exile, blood and tears to attain their basic inalienable rights as a nation. We therefore appeal to all governments and organizations represented here today to put real, tangible pressure on Morocco to immediately halt the repression of the Saharawis, to respect Human Rights, to put an end to the virtual blockade of the Western Sahara and ultimately, to end the occupation of Western Sahara.

Thank you for your attention. 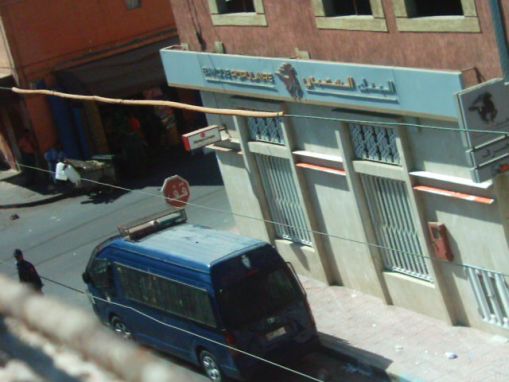