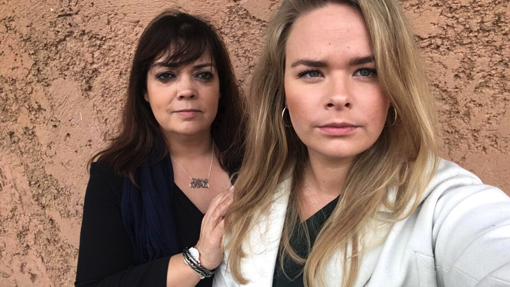 On day 10 Hassan Dah, Abdallahi Lakfawni and Mohamed Embarch Lefkir, testified in front of the court. Interruptions and humiliating questions were frequent and the testimonies are in violation of the Torture Convention, says international observer.

When talking about their sufferance, about the torture they endured, and their political opinions, the accused were constantly interrupted. The court continued to ask questions based on declarations in the testimonies extracted under torture. They threatened to torture me in ways I couldnt even imagine; I was terrified, said Lefkir when was asked why he signed his whole name to the testimony.

"We are witnessing psychological torture, and the testimonies are in direct violation of article 15 in the Torture Convention," says observer to the trial, Tone Sørfonn Moe (NO).

The court commenced with questioning Hassan Dah. Hassan Dah declared that as a Saharawi, which culture is based upon ethical values and norms, and as a human rights activist, he condemned all the acts committed. They violate the right to life he declared. He sent his condolences, both to the Moroccan families, but also to the Saharawi families who lost their loves ones when they were killed by the Moroccan military forces during the attack on the camp. Hassan declared that he was abducted, tortured and imprisoned due to his political activism and his political opinions concerning the right for self-determination to the Sahrawi people, and the right to benefit from the natural resources. Hassan declared that this court was not legitimate, but was abruptly interrupted. Hassan tried to commence his declaration, but was again stopped by both the prosecution and the preciding judge. The prosecutor raised to his feet´s, knocked the microphone and screamed at the accused. The judge declared that Hassan, by not sticking to the subject and after many warnings, had refused to answer the question. The defence tried to advocate that the accused has the right to defend himself in the manner that he considers best, but was constantly stopped. The civil party answered that the accused has based his arguments on international humanitarian law, which had nothing to with a Moroccan courthouse. When Hassan was giving back the word he declared that;

“The civil party has now mentioned the international humanitarian law. The fourth Geneva Convention is meant to be applied. It is applicable in to instances, and one of them Is when a region is under military occupation. Western Sahara is occupied by Morocco military forces”.

The prosecution jumped to his feet and screamed, leaving the defence to ask for five minutes to talk to their client.

After the break, Hassan commenced his testimony by explaining that Gdeim Izik was a peaceful protest camp, which started the Arab spring, and that the camp itself proved that the saharawis does not want to live under Morocco occupation. Hassan declared that;

“unfortunately, and as the media has showed, that Moroccan government decided to attack the population of the camp while they were sleeping. This attack revealed the true face of the Moroccan regime”.

Again, the prosecution raised to his feet and screamed towards the accused. When asked where Hassan was arrested, he stated that he wasn't arrested, he was abducted by masked men in a café. He told how he, Thalil and El Bachir, was transported to an unknown place, and tortured “in every possible way”, and that they were, five days later, given over to the gendarmeries. He stated:

“We are used to this from the occupation. We have endured torture since 1975.”

He told how the interrogation, and during the torture, he was only asked questions relating to a trip to Algerie in September 2010 where he attended a international conference about the right to self- determination, his activism and his relationship to Polisario Front. He told how they forced him to sign, already written reports, and declared that they were falsified. He told that after meeting the investigating judge in a terrible shape, may god forgive him, he sent us back to prison.

"In the prison we were dressed naked, and thrown cold water on, during the winter. We were beaten and kicked, and filmed and taken photos of; all under the supervision of the prison director."

Hassan urged that he was not present during the attack on the camp. The military forces surrounding the camp, which Hassan declared was a “siege”, had stopped a caravan from entering the camps with medicines. Hassan declared that he had been with the caravan to observe the violation of the human rights, and was stopped by the police on his way back. Hassan declared that the falsified minutes cannot be used against him, that the evidence was illegal, and he urged that reports from the medical examinations must be revealed. Hassan refused to answer the questions raised by the civil party, since the civil party is not yet given a partial status, and has therefore no capacity to ask questions.

The next to be questioned was Abdallahi Lakfawni. Lakfawni condemned what had happened during the attack on Gdeim Izik, and sent his condolences to all who lost a loved one that day. Lakfawni stated:

“everybody know that that the Gdeim Izik camp had social demands. After 28 days, when revealing the unity of the Saharawi people, the camp was attacked during the early hours on November 8th”.

Lakfawni explained that he was kidnapped and sent to the occupying country. He declared that he is arrested beacause the Moroccan states is trying to get rid of us, and the problems we cause because of our political activism. Lakfawni stated that he was arrested on December 9th 2011 where the police attacked his cousins house, and threw him from the window, and took him to an uknown place. “They run on our blood”, he stated. When asked about the movie Lakfawni stated that "everything is fabricated of calculated by the Moroccan occupier".

He explained how the Gdeim Izik camp was controlled with an "iron hand". The camp was surrounded by military personell, surrounded by a wall, with only one entrance. The military had made 7 checkpoint, for us to enter the camp. He told how he was asleep when the military forces attacked the camp, and that it was like an earthquake - it was chaos - people were running, of they screamed. He told how women and children passed out due to the teargas. Everyone walked back to the city. He stated:

“If Morocco had wanted us to know the truth, we would have had the truth; but they have buried it”.

He stated that he had nothing to do with the reports, and that they were all falsified. When asked questions from the civil party he refused to answer.

The next that was questioned was Mohamed Embarch Lefkir. He declared that the Gdeim Izik was a protest camp, where we protested the marginalisation of the Saharawi people. He told that he had joined the camp the first week with his family. Lefkir declared, meet with screams from the prosecution office, that;

He declared that on the early hours of the attacked, Lefkir had passed out due to the teargas, and that he was carried by his family for 4 kilometres, and later walked the remaining 8 kilometres to his home in El Aiun. When asked about the reports Lefkir declared that he denies everything in them. He told that they abducted him, when he was assaulted by masked men in his uncle house. He told that he was beaten up in front of his family and neighbours; and that they took him to a unknown place. He told how they hanged him in the ceiling by his foot and hand (i.e. known at the chicken method), and kicked him and beaten him. He told that they put a cloth in his mouth and poured toilet water in his mouth; they burned him with cigarettes; poured urine on him; took of his nails with a clipper; and electrifying him and threatened him with rape. He told that during the torture he was only questioned about his political position of his relationship to Polisario Front. The torture lasted for three days, where he was sent to the investigative judge, and tortured in front of the judge. They sent him to the prison, where the tortured commenced, and he was again hanged in the chicken position. Lefkir stated;

“We condemn the silence from the UN, and demand our immediate release”.

The judge interrupted Lefkir on nomerous occasions, and asked why he had signed the declarations. Lefkir stated that the guards, with the judge present, stated that:

“If you don't sign, I will send you back, and you will be tortured more and worse than what you have already endured."

He explained how he had denied all the charges to the judge, and explained him that he was arrested because of his activism. Lefkir declared that the judge had stated:

And I forgive him, Lefkir stated. Lefkir refused to answer any questions placed forward by the civil party.

Lefkir ended his declarations by commenting on the medical examinations ordered by the court. He told that he didn't trust the medical examinations. He told that during his examination the alleged doctor started to argue with him about the right to self-determination for the people in Western Sahara, where the doctor stated that it would be “safer” for him to agree with the Morocco state. Lefkir therefore stated that he was not sure if this woman was a doctor or a police officer.

The court was adjourned at 10:15pm until tomorrow 11am.