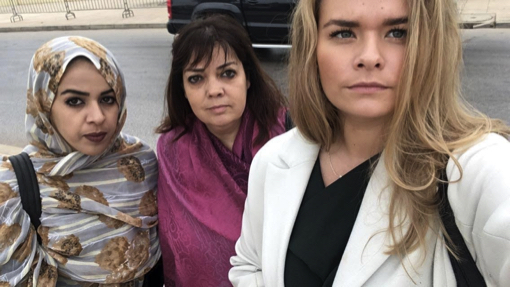 Today Abdallahi Toubali, Sidahmed Lemjeyid and El Bachir Khadda gave their testimonies in front of the court. Toubali was asked to sign two documents with his eyes shut during the testimony. This to prove he was blindfolded while signing his confession.


Minutes
The hearings against the Group Gdeim Izik commenced with the declarations from Abdallahi Toubali. Toubali declared himself innocent of all charges and denounced that he, as vouching for a peaceful solution to the conflict, is a peaceful man. He sent his condolences to everyone that died in Gdeim izik, and urged that he had nothing to do with their death, due to the simple reason that he wasnt at the scene of the events. He also sent his support to all the Saharawi families that lost their loved ones during the attack on the Gdeim Izik camp, where he claimed that the Saharawi live under repression and discrimination; they see the Moroccan victims on the television where their only hope is that the UN will expand the competence of Minurso to protect human rights in the occupied territories of Western Sahara.

Toubali told about how he was a member in the dialogue committee. He explained that the camp was born due to the marginalisation and the repression of the Saharawi people, where the people had social demands related to work and university. He explained that the committee was elected by the people to serve as spokespersons on behalf of the citizens in the camp. He explained how the committee had productive meetings and that an agreement was shortly set into place. People came from every part of Western Sahara to join the camp. We were thousands of tents. We waited for the implementation of the agreement, but it never came. Toubali asked:

“Why did you break the agreement? We were waiting for a solution.”

On the 4th of November, the minister of interior came on behalf of the king. The minister agreed to our terms, and was supposed to come and implement the agreement by giving every citizen in the camp a social card, the following Monday, the 8th of November. He explained how the agreement was oral, where the demands were to met the following Monday, where the people in the camp were to be given a social benefit card in person, and thereafter leave and go home.

The minister contacted us in the committee and tried to “buy us” with money, and he started to threaten us, Toubali told. On the 4th of November he told me in the street of Smara “to take the money and leave” … I told him that “this is a commitment to the thousands of people in the camp. I will not let them down. Their demands are legitimate. They only want better living conditions. This is not a political demand. The political discussion is between Morocco Sahrawi Arab Democratic Republic”. Toubali stated: “I prayed with this man, and now he send me to prison? I don't understand this”.

He told that on the 7th of November, the day before the events, the road was blocked. He told how was in a traffic accident, and that he was hit by a police car, and that he suspected to be an undercover police car. "I was carried to the hospital where they refused to receive me. They didnt help me until a woman from the parliament came and demanded my admission. I went home at 10pm, and my family took care of me where I was in a critical condition."

Toubali told how he was attacked at the market by masked men, and taken to the police headquarters. "They tortured me. I couldn't walk for a long time. They tried to rape me with a stick, they urinated on me, and spitted on me. I was moved to the gendarmerie where I was questioned, where he asked me why I refused to take be bribes and compromises. They asked me about my relationship to Eenama Asfari, the Polisario Front, and the delegation to Algeria. They repeated the questions, and I told them that I didn't know." Hussain joined me on the following days he stated;

“he was in a terrible shape. He couldn't stand on his feet. I took of my own clothes and changed his clothes”.

When arriving to Sale 2, we were again tortured, under the surveillance of the prison director. They took of me all my clothes. They hit and they kicked, and threw cold water on us. It was a small room. For two months; we were constantly harassed and tortured, day and night. When we complained, they tortured us together. Toubali urged at the end of his testimony that the presiding judge must call upon the parliament member that went with him to the hospital, as she could serve as his witness, and prove his innocence. When asked about how the camp was organized and how it was financed Toubali declared that:

Toubali stated that he had signed all his declarations without knowing the content of them, whilst blindfolded. The presiding judge asked Toubali to sign a document, in front of the court, to prove that he in fact could write his whole name and sign without looking at the document (i.e. looking up or to the side). The defence objected, claiming that being blindfolded and looking away were to different things. Toubali thereafter signed two documents in front of the court whilst not looking. The civil party thereafter shouted: “This is the same signature!”, where the defence declared that they agreed.

The next who was questioned was Sidahmed Lemjeyid. Sidahmed commenced his testimony by declaring that, if this was to be a fair trial, the trial had to be held in the occupied city of El Aiun. Sidahmed thereafter identified himself by:

“I was born in Western Sahara which is occupied by Morocco. I am president of an organization that works to reveal the human rights violation in the occupied territories. I am here due to my political background”.

He denied all the charges, and commenced by declaring what had happened to him; both the abduction and the torture. He told how he was transported to the gendarmerie, where he was tortured both psychological and physical;

"I was subject to every kind of torture. Its impossible to explain what I went through. The torture is methodical to break us. This are racist".

He told how he was only questioned about his political activism and his activism for human rights. He told that the torture was so brutal, that they broke a bone in his back. When he asked if he could see a doctor, the one who tortured replied; "you deserve to die for your reports that insults the great kingdom of Morocco". I was deprived of all my rights. He told how he showed his scars to the investigative judge who turned him away, and sent him back to the prison for more torture. He told that they took of him all his clothes, and poured cold wated on me and beat me. They brought me to a cell, removed my handcuffs and my blindfold, and continued the torture. I don't know where I was, or even the city. They denied me sleep and water.

Lemjeiyd explained how he showed the scars to the judge, and how he turned him away; “He saw my scars. He saw that I was being tortured. Torture must be witnessed and reported. I asked him for medical examination, but the judge did uphold his responsibility as a judge; he did nothing.”
Lemjeiyd told how he delivered a complaint to the investigative judge; the same person that he complained about. And that he complained to the prosecution office, and to the national council of human rights. I never received an answer; “Nobody helped me. The doctor himself stated that he couldn't help me, because he was 'under pressure'. This is unacceptable.”

“I have now told you about my sufferance. But not only mine, also of the sufferance of the Saharawi people, who have lived under repressions since 1975.”

The next who was questioned was El Bachir Khadda. El Bachir stated he is an human rights activist, and that he was one of the founders of Equipe media in the occupied territories, and how he wished to talk about his abduction and the reason for it. He told how he was abducted on December 4th, with Hassan Dah and Mohamed Thalil, by masked men;

“They took us to a place unknown, and tortured us. We were blindfolded, and we did not know if It was day or night. We were beaten whilst interrogated about out political activism”

he told how they were transported by plane to the military judge where he was placed in fron of the judge. He has asked for water, where the judge stated that he did not run a café. When asked why he didn't ask for medical examination, El Bachir answered that he feared for his life, he could bearly walk; and did not dear to ask of anything after being denied even water. He told hoe he was sent to Sale 2;

“We had no clothes. They poured water on us, with bags over our head. Once I was tortured because I smiled at my mother when she came to visit. The torture was supervised by the prison director.”

When asked why he didn't undergo the medical examinations El Bachir declared that he demanded an impartial and independent examination in line with the Istanbul protocol; where the once executing the examination could not be Moroccan or employed by a Moroccan institution.

El Bachir commenced his testimony by declaring that the Fourth Geneva Convention must be implemented, but was constantly stopped by both the prosecution and the civil party. He explained how the Geneva convention is admitted both in peace time and during armed conflict, according to art. 66 in the fourth Geneva convention.

He urged that he is a Saharawi; fighting for their right for self-determination. He urged that this accusations was only put forward to revenge our activism and our fight for human rights. The rule of law is absent in the country of the occupier. When asked by the movie El Bachir answered that he condemns all the acts showed in the movie;

"I am first a human being. I am against war and for peace".