Support us
Norwatch: \"Here the stolen goods are unloaded\"

Jinhui, the Oslo Stock Exchange-registered dry bulk shipping company, will tomorrow unload its last tons of controversial phosphate in New Zealand. The phosphate originates from occupied Western Sahara and has been shipped out of the country despite advice to the contrary from the Norwegian Ministry of Foreign Affairs. Norwatch has got photos and video footage of the unloading.
Published 15 February 2008
Norwatch: "Here the stolen goods are unloaded"

Trade in phosphates from occupied Western Sahara is a violation of both international law and the guidelines from Norwegian Ministry of Foreign Affairs. Western Sahara has been occupied by Morocco since 1975 and the country is being looted of its most valuable natural resource, phosphate. 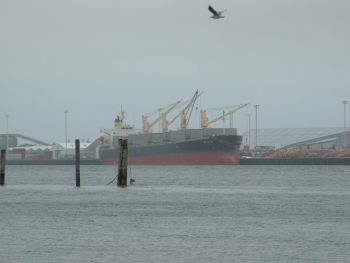 This does not stop Jinhui Shipping and Transportation Limited. The company operates and owns the bulk carrier Jin Cheng, which this week unloads an unknown amount of phosphate in New Zealand. Tomorrow, Saturday, the company discharges the remainder part of its cargo in the country. Jinhuis main office is situated in Hong Kong, but the company has been registered on the Oslo Stock Exchange since October 1994. This is the only place in the world where it is registered, and there are several Norwegian investors in the company. The largest Norwegian shareholder, Storebrand, says they will contact with Jinhui regarding the issue.

Norwatch has previously revealed that Gearbulk, the Bermuda registered shipping company of which the Bergen based Jebsen family owns 60%, has made similar shipments to New Zealand. This is the first time a shipping company registered at the Oslo Stock Exchange has been caught red handedly taking part in these shipments.

"Bad taste in the mouth"
Monday representatives from the New Zealand Western Sahara Association went down to the port to watch the Jinhui carrier. It is this organization which has taken the photos and the video footage that Norwatch releases today.

See video of the vessel on Youtube here.
You can also download high resolution videos of:
-the vessel discharging the phosphates [26 mb].
-the vessel, seen at a distance. At the end of the harbour, you see the factory of the local phosphate importer, Ballance Agri-Nutrients [31mb].

"It is a scandal that this phosphate is allowed to enter New Zealand without government interference. This phosphate has been stolen from an occupied country", Noel Peterson of the New Zealand Western Sahara Association said to Norwatch.

The carrier Jin Cheng left Tauranga, New Zealand, Monday night after unloading part of its cargo. It is now on its way to South Port on the southern tip of the country, where it will unload the remainder of the cargo today. According to Peterson the fertilizer company Ballance Agri-Nutrients is the importer of the phosphate. After having been transformed into fertilizer, the final product is used on the fields of New Zealand.

"The food on our dinner tables originates from an agricultural sector dependent on plundering the future of an occupied people. It leaves a bad taste in the mouth knowing that New Zealand takes part in this", said Peterson on the phone from New Zealand.

The New Zealand association wishes now to convince the local phosphate importer to buy phosphate from other suppliers on the world market, or to develop local and more eco-friendly fertilizers.

In the meantime companies like Jinhui must put a stop to these transports, said Peterson.

Silent company
Jørn A. Henriksen of the Norwegian Support Committee for Western Sahara says that they first learned about the Jinhui ship on its way to New Zealand three weeks ago. They then contacted the main office of the company in Hong Kong.

"We wanted to learn more about their involvement and to know exactly who the Norwegian owners are. The Norwegian Jinhui investors are entitled to know that the company takes part in this trade. To transport phosphate from the occupied territories is unethical and politically very controversial. It contributes to legitimizing, strengthening and prolonging the brutal occupation", Henriksen said to Norwatch.

Henriksen said Jinhui still has not replied to their repeated requests. He refers to the case of the seismic company TGS-Nopec, which in 2002 was criticized by its shareholders when it got involved in the oil industry in the occupied territories. About 20 shareholders withdrew from the company.

"Jinhui must clearly explain its involvement in Western Sahara, both to the Norwegian Ministry of Foreign Affairs and to the investors, if they wish to avoid the same kind of reaction as TGS-Nopec. We assume that Jinhui will follow the guidelines from the Ministry, as well as the ethical standards followed by Norwegian investors. We strongly assume that the Oslo Stock Exchange will not become a haven for such activity", Henriksen states.

As many as 1600 Sahrawis may have been employed in the phosphate industry in Western Sahara prior to the Moroccan occupation in 1975. That year most of the population of Western Sahara fled to refugee camps in Algeria, where they remain to this day. Those who stayed in the occupied areas and tried to keep their jobs in the phosphate industry were quickly forced out. A report is_is_published by the French organization France Libertés  Fondation Danielle Mitterrand implies that 90% of the Sahrawi employees in this sector have been replaced by Moroccan immigrants.

In 2005, it was discovered that Storebrand also had invested in the American oil company Kerr-McGee, TGS-Nopecs partner at the time. Storebrand reacted strongly, selling its shares in the company.

"Kerr-McGee does not wish to discuss this matter with us, but claims their contract with Moroccan authorities is legal. It is our opinion that Kerr-McGees activities contributes to a violation of international law", Storebrand stated at the time.
Vice President, Corporate Responsibility, Elin Myrmel-Johansen confirms that Storebrand seriously considers the issues concerning business activities in Western Sahara. She states they already are aware of the Jinhui shipment.

"There are several companies that are involved in this trade, and we are in the process of investigating the extent of the problem", Myrmel-Johansen said to Norwatch.

"As soon as we have a complete overview, we will discuss the matter with Jinhui and the other companies, as we always do in such cases", she said.

Tuesday, Norwatch sent an e-mail to Jinhui with questions regarding the shipment, but has so far not received a reply.

Text translated from Norwegian by the Norwegian Support Committee for Western Sahara. 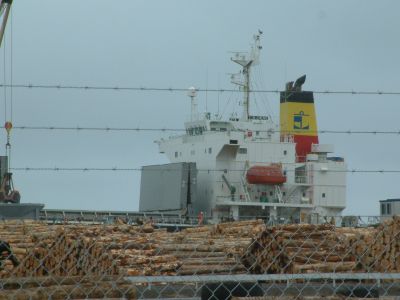 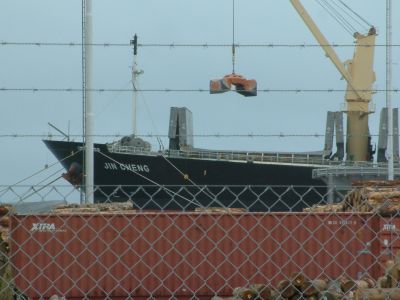 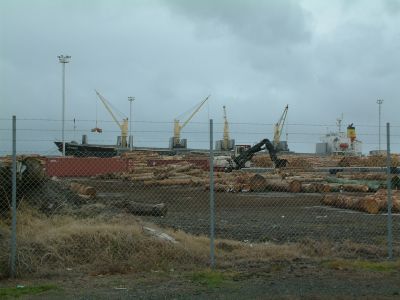