Support us
Australian demonstration against the phosphate imports


On Friday 21 September The Australia Western Sahara Association (AWSA) held a peaceful community assembly in front of the Melbourne headquarters of Incitec Pivot (IPL), one of the three Australian companies that import phosphates from Western Sahara illegally.

The event was attended by a crowd of concerned Australians and members of the Federal Parliament.

The speakers, introduced by Ron Guy of AWSA were Gavan O'Connor MP, (Labor), Senator Lyn Allison (Australian Democrats), and Greens Senate candidate, Richard di Natale. All three speakers spoke very well on Western Sahara and each had a different take on the issue. They all emphasized:
· the importance of raising awareness among Australians
· the serious injustice being done to the Saharawi people
· The fact that Australia is supporting a brutal regime by allowing companies to trade with Morocco.
· Gavan O'Connor commented that our farmers would be shocked if they knew the story behind their superphosphate fertilizer.

A petition to the Australian Government was handed around and signed asking the Government:

"to refuse importation of phosphate rock from Moroccan occupied Western Sahara, until a referendum of self-determination is held on the countrys future. Until its sovereignty is decided, under international law, Western Saharas natural resources belong to the indigenous people of the territory, the Saharawis, and cannot be exploited unless they consent to and benefit economically from the trade."

The demonstration made its point asking the company to inform shareholders about what lies behind the phosphate from Western Sahara. This will make our job easier at your next AGM, said Ron Guy.

Over a year ago, the company was made aware of the UN position on the exploitation of the natural resources of a country which is awaiting decolonization and has decided that since our government has not banned the product, they can continue importing it. This they are doing. Earlier this month shipments were off-loaded to IPL in Portland and Geelong from the Delzoukre coming from Laayoune in the Western Sahara with phosphate from Bou Craa. Australia is one of the largest importers of phosphate from Western Sahara. Malainin Lakhal told them that we would continue to campaign against the trade. This we are doing. 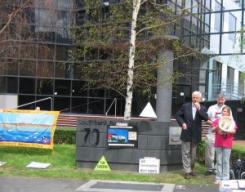 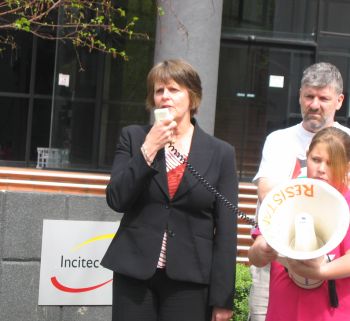 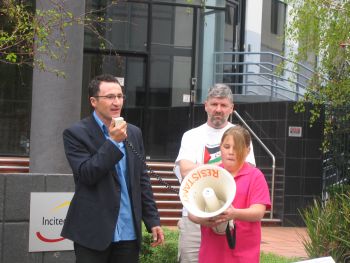