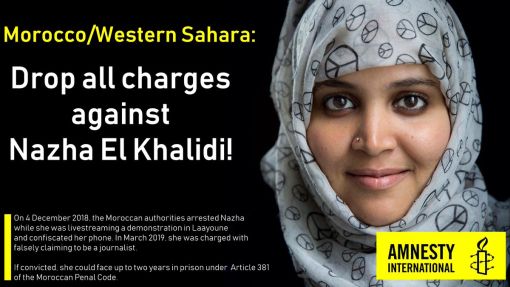 A judge in occupied Western Sahara today concluded that the verdict in the case against Saharawi journalist Nazha El Khalidi will be announced on 8 July.

Today, the controversial case against Saharawi journailt Naziha El Khalidi commenced in front of the Court of First Instance in El Aaiun, Western Sahara. The king prosecutor upheld the charges against Naziha, and asked the court to find Naziha guilty. The judge anounced that a decision will be rendered on 8 July.

The case of Naziha is of importance to the people of Western Sahara, as it the Saharawi people's own coverage of the human rights situation in the non-self-governing territory occupied by neighbouring state Morocco.

According to the king prosecutor, Naziha was affirming her guilt in front of the court, by invoking that Article 19 of the International Covenant on Civil and Political rights ensured her right to freedom of opinion and expression.

On 23 June, a total of five international observers had been expelled from El Aauin airport, preventing them from attending the trial of Naziha. On 24 June, the court was surrounded by police, both outside and within the premises of the courthouse. Saharawi activists wishing to attend the proceedings were allowed to enter.

Naziha invoked in front of the court that she is a journalist belonging to the Saharawi journalist organization Equipe Media, explaining that Equipe Media reports on the human rights situation in the occupied territories of Western Sahara. Naziha explained to the court that Equipe Media has been undertaking this kind of work for over a decade, and that Equipe Media is recognized by several human rights organizations and international media as a Saharawi journalist organization. She explained to the judge that Equipe Media has never been confronted with these kinds of allegations, and informed the court that the accusations against her has already been denounced as illegal by the UN Human Rights Mechanisms, Amnesty International, Human Rights Watch, and several other international organisations. Naziha further informed the judge about how her personal information available on her phone, currently taken by the office of the prosecutor, is being used in a "dirty" was, in order to intimidate and harass her.

The defence invoked that Morocco is obliged to abide by its international obligations, and to ensure its compliance with Article 19 of the International Convenant on Civil and Political rights. The defence invoked that the Moroccan constitution ensures that national law must be in compliance with international law, signed and ratified by Morocco. The prosecutor asked the judge to find Naziha guilty, urging that "we" are now in Morocco, and that the accused has to respect Moroccan national legislation, adding that Naziha had never been subjected to any form of ill-treatment or torture.

According to the prosecutor, the fact that Naziha had not signed the police records proved that she had not been tortured, since all that are tortured signs the police records (confessions). The judge ruled that a sentence will be rendered on 8th July in front of the Court of First Instance in El Aaiún. Upon leaving the court house, Naziha and her family was followed by the police, and her house is currently surrounded by the police.

After the postponement of Naziha´s trial on 20 May, a communication sent by the UN Human Rights Mechanisms to the Moroccan Government was made public. The communication is dated 3 April 2019, and was signed on behalf of the UN Working Group on Arbitrary Detention, the Special Rapporteur on the promotion and protection of the Right to Freedom of Opinion and Expression and the Special Rapporteur on Torture and Other Cruel, Inhuman or Degrading Treatment or Punishment.

The Special Rapporteurs held forth that the national legislation criminalizing independent reporting on the Western Sahara issue (Article 381 of the Moroccan Penal Code) is in violation of Morocco´s international obligations, and highlighted:

The case against Naziha El Khalidi