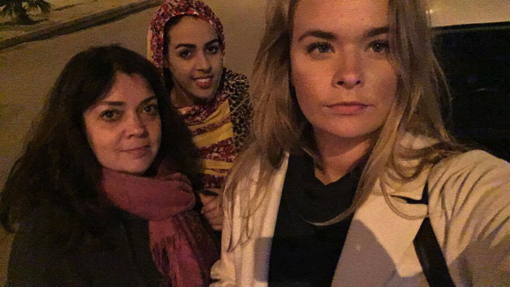 Today Cheikh Banga, Eenama Asfari and Mohammed Babait gave their testimonies. Just like the previous days the questions they were asked were in direct violations of the Torture Convention. The court was adjourned until Monday 27th of March.

Photo: Isabell, Leila and Tone, observers in the trial.

"This is clearly a political trial. The evidence against the accused are absent", stated Tone Sørfonn Moe, international observer present at the Gdeim Izik trail.

Mohammed Babait
The hearings commenced by questioning Mohammed Babait. Babait explained that he wasn't at the camp during the events, and that he didn't have any relationship to the camp, other than his mother that had her tent at the camp. Babait explained how he used to visit his mother during lunch with his mother and his daughter, and that he lived in El Auin and worked for the governor. Babit explained that he was arrested 9 month after the dismantlement of the camp, and that the ones who arrested him knew me and knew that I had nothing to do with the camp. He told that they had taken him to the police headquarters, and he asked the police chief why he was there, where the police chief answered that the others had to “take care of him”, because he knew him. He told that they pulled a bag over my head and beat me - next day I was taken back to an office, where we broke the fast; it was during Ramadan. Some men entered the room and pulled a hood over his head again, and pushed him down the stairs; and transported him to a warehouse.

“They took off all of my clothes and tortured me. They asked me no questions about Gdeim Izik, and told me that I was a ‘problem’ since I worked for the governor. They hitted me with a bat. I couldn't walk. They carried me in to the judge, and tooked me back to the police station where they continued beating me. The next day they took me to the attorney general. They didn't ask me anything. They asked me to sign, and I did. There are things in these reports that are only lies.”

He told that he was surprised when the Military Court sentenced him to 25 years. I am innocent, he urges. I have been suppressed ever since. My daughter was one year old when I was arrested, and now she is 7 years. I am innocent - all the people here knows it; they know what happened at the Gdeim izik, and the Gdeim Izik represent all the Saharawi population, Babait declared. Babit stated;

“If you really want to give justice to the victims, it is by revealing the truth. (…) I feel sorry for all the victims, and for my family, and all the Saharawi families.”

When Babait was asked questions about the minutes and the declarations from the police and the investigation report, Babait answered that:

“I haven't said this, not in any of the questioning. I was never asked these questions. They left a blank space in the reports, and told me to sign them”.

Babait demanded to meet the ones who had been telling lies about him.

“I protest against this trial which uses false reports and minutes and confirm that the court has deprives us all of our rights when they rejected the proforma arguments that my defense presented. This is rights that in my opinion must be respected. (...) What's the use with a constitution of conventions if they are not respected? This means that the court are not ready to evaluate the evidence of this case. There are argument that our defence has placed forward, where the court is treating a political question, by trying to coved it with a judicial blanket. This is a political issue”.

Eenama thereafter commenced by declaring that he demanded that the CAT decision, regarding his case, was admitted into the document file, and he demanded medical examinations in line with the Istanbul protocol, and that the court submitted the memorandum on the courts competence and the fourth Geneva Convention. Eenama declared that he wouldn't agree to be tried based upon falsifying reports. The court did not admit the memorandum nor the CAT decision, and declared that this was subject that had to be discussed later.

Eenama thereafter declared that the decision to attack the Gdeim Izik camp was abuse of power, and what happened in the camp was a consequence of the attack from the government. The decision to attack the camp was not legally based, as it was not to defend the population but rather to attack civilians, and that they, the detainees blame the administration and the attorney general which gave the order to attack, Eenama declared.

Eenama explained how he was abducted on November 7th, and that he therefore couldn't have done the actions that he is accused of; and furthermore, that all the declarations is falsified and based on signatures extracted under torture. Eenama declared that the usage of the declarations constituted a breach to art. 15 of the Torture Convention, and invoked this article as response to questions based on the declarations. When asked if he had a lawyer with him in front of the court, during the detailed interrogation he declared;

He declared that the torture was the basis of this case, concerning all the detainees, all the inhabitants in Morocco and Western Sahara, and that it is a decisive matter that concerns us all. I dont want to go back, Eenama declared; I want this historical platform to ensure a fair trial  this is a test for us all, and stated that;

“We were systematically tortured, and this is mine complain. My name is mentioned in all the files, and during the dismantlement. We are now 7 year after. We were systematically tortured and arrested. We were not tortured in front on the judge, but we were beaten and kicked and layed naked in front of the judge. After five days without food, water or sleep; we were pulled like animals by the gendarmerie to the judge, and they pulled our hoods of. This is 7 years ago. I look to the future. I am not a victim. I am not an accused. I am a militant.”

Eenama declared that he was a political prisoner, and was only subjected to imprisonment due to his fight for self-determinations for the Saharawi people. Eenama refused to answer the questions from the Civil party.


Cheikh Banga
The next to be questioned by the court was Cheikh Banga. Banga commenced with thanking the court, and his attorneys; who he declared was a point to follow, where the Saharawi lawyers are old political prisoners; and now stand in the position they are at. He declared that he condemned the civil party participation in depriving them of their civil rights. He condemned the media campaign that portrays the group as criminals.

He explained that the masked men took him to the gendarmerie where he was tortured for four days, before presenting him to a judge. Banga said that the torture was systematic, and that he lost consciousness on several occasions. He declared that he was never asked about Gdeim Izik, and that the reason for his abduction was his political opinions.

Banga was constantly interrupted by the prosecution who raised to his feet, and screamed and knocked his microphone.

Banga explained; that his convictions about forming a state for the Saharawi people, and the right for self-determination, is the reason behind his arrest and was the sole object he was ever interrogated about; therefore, his political opinions was the core of the case.

He explained how he, already at an age of 16, was arrested for his beliefs, and criminalised by the occupier. He declared that he felt sorrow for the victims, and that he wanted us to find the truth; but that he also felt sorrow for his family, his mother and his sister who suffers, because I am thrown in jail. Banga was again interrupted and stated;

“We are human beings. We have feelings. I may forget the torture, but I never forget the tears on my mother's cheek when she was stopped from visiting me.”

Banga declared that the reports were only a product of the imagination, and when asked about why he didn't declare to the judge that we were being tortured, as stated in the report, Banga answered that;

"What is written here is not the truth. When he asked me about the torture; I was bleeding and I miserable condition; and I asked him who was responsible for the torture; and the judge answered me that it was none of my business."

Bangas declarations were stopped, and the court adjourned at 2am, until Monday March 27th at 9:30am.