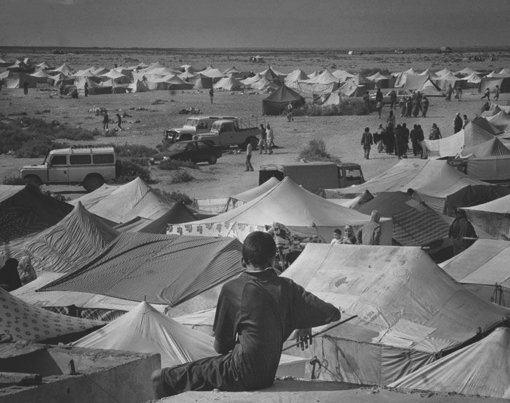 Picture: Boy looks out over the Gdeim Izik camp (By: Anonymous)

The proceedings against the Group Gdeim Izik commenced on the 14th of March at 10:40 am.

The court proceeded with the interrogation of the accused. The first to be questioned was Machdoufi Ettaki. Ettaki was by the military court sentenced to time served, and is therefore not imprisoned with the rest of the group. Ettaki started his testimony with stating that, "in the name of Allah, I greet the Polisario Front, and give my solidarity".

The judge asked Ettaki to take the politics out of the courtroom, where Ettaki answered that he considers himself as a Saharawi from Western Sahara; that “we are tried in made up cases by the Moroccan occupation”. Ettaki stated that, “as every inhabitant in El Aaiún and every Saharawi, I had a tent in the Gdeim Izik camp”. He told how he came to the camp with his family, and that he was not influenced by anyone; as every Saharawi he had social and political demands. He explained how the basis for the camp was the people's sufferance, and their demands for basic human rights. He urged that the two are linked together; one cannot distinguish between the reason for the camp and why people went there. Ettaki stated that "it's the people of Western Sahara that has suffered for more than 40 years, and that we have never killed anyone; and that it is Morocco, who has occupied the territory for over 40 years, who must be punished for our sufferance". He explained how the people lived peacefully in the camp alongside one another like neighbours, and that they protested against inhumane living conditions in the territory. He explained how, when the Moroccan military forces attacked the camp, which consisted of children, elderly, women, handicapped and men, the forces did not give the people time to evacuate before they attacked. It was early in the morning when a helicopter came, and by one notification told us to evacuate the camp, where Ettaki claimed that the camp was attacked within 5 minutes.

He explained how the guards had force his finger down on a paper, whilst the confession was covered by another paper. The judge stated that it's hard to make a fingerprint, whilst having your hands handcuffed behind your back; Ettki said: "I was abducted, and tortured for five days, without my family knowing where I was". He stated that when he came to the military court; he did not know that he was talking to an investigative judge. He explained how he was in a very bad shape; that he could barely talk due to the torture inflicted upon him, and that a guard had forced his eyes open. He claimed that he was being tortured inside of the court facilities, and was covered with blood.

He explained how, when evacuating from Gdeim Izik camp on November 8th, when military forces attacked the camp, he helped a woman along the road. Whilst helping the woman, he was attacked by 10 military personnel, who arrested him. He testified to how he was beaten inside the car and that they transported him to the military headquarters in El Aaiún, where he was held in a cell for five days, blindfolded and handcuffed, and repeatedly punched and kicked.

He explained that he had no access to toilet and urine and feces were thrown on them. The confessions were taken while he was blindfolded and his hands cuffed; and guards forced his fingerprints down to papers; which he did not know the content of.
Mohamed El Bachir Boutinguiza was the next to be questioned. When he was asked how he reacted to the accusations, he replied that "I was arrested and imprisoned for my political opinions about what Morocco does in Western Sahara". When the judge asked him to stick to the matter, El Bachir said that he does not trust the Moroccan justice system, and claimed that "I have been bitten by a snake earlier". El Bachir told that this is a war against the Saharawi, dated back to 1975. He stated that he is here because of the Saharawi case, that he was abducted, and that 15 of his friends are still missing. He told that at an age of 16, he was imprisoned in the prison of Meguna. El Bachir indicated that the Fourth Geneva Convention had to be implemented; and that the occupation forces have abducted him from his country, and that the Kingdom of Morocco have no right to judge him.

Boutinguiza explained how he, on November 19th, was kidnapped by masked men who were heavily armed. "They tortured me, clothed me naked and urinated on me, they raped me from behind" and they put his hands in handcuffs and blindfolded him. He told how he was transported from the police station, to the prison where the torture commenced. He was transported to the military court, where he told the judge that he needed to go to the hospital.

When the judge asked him questions relating to the confessions, where he testified to run over military forces and urinated on the corpses; he said that the confessions are made up stories; they invent a story and take you into custody. "I am used to this - I am here because of my political beliefs", he said. He urged that he had nothing to do with the reports, and that the international community must intervene. He stated that a lot of people died this day; and those who committed the crimes are walking freely in the streets of El Aaiún; “I am innocent; I am captured because of my political opinions”.

He claimed that he was not in the camp when it was destroyed; where he could not have committed the crime because he was in El Aaiún in a friend's wedding. When asked if anyone told him to go to the camp, Boutanguiza answered that "this is our culture; our culture is to live in tents in a calm atmosphere. The tent is the symbol." When asked if he knew about the dialogue committee he stated that everybody know this committee, and that he wished that he was a part of it.

Boutanguiza refused to answer questions from the civil part, and stated that the civil part is not a formal part of the proceedings, and that they have already declared me guilty, depriving me of the principle of innocence. He stated that he respects the attorneys, but not when they are trying to cover up crimes committed by the Moroccan forces in the occupied territories in Western Sahara towards Saharawi. When asked questions about the movie, Boutanguiza declared that he did not recognize anything in the movie, and that the movie is manipulated as a part of the fabricated story.

Mohammed Thalil was the third to be questioned. Thalil commenced his testimony by declaring his respect to the president of Polisario Front Brahim Ghali, and by asking for a minute of silence for the late President of the Polisario Front, Mohamed Abdelaziz. Thalil explained how he, for his political opinions, and as a member of the Polisario Front, had been abducted, tortured and imprisoned for 6 years. Thalil asked for a translator, because he speaks Hassaniya, as he does not speak Moroccan Arabic, as he is a Saharawi. He claimed that he did not recognize Morocco, which occupies his country, and that he only recognizes Polisario. He urged that “I'm not a murderer, I'm here because of my political opinions”. When asked where he lived, Thalil stated that he lives in Western Sahara, but when my country becomes independent I can live wherever I want, and urged the fact that he is a Saharawi and not Moroccan.

Thalil explained how he never went to the camp and was in El Aaiún during the events, but that he wishes for self-determination for the people in Western Sahara. He claimed to have been arrested in El Aaiún for being a member of the Polisario Front. Thalil repeatedly tried to explain the reason for his arrest, but was constantly stopped by the prosecutor who raised to his feet and knocked on the microphone. Thalil stated; you claim that this is a fair trial, but this Is all a theatre, I don't care about theatre. I want to tell the truth about why I am here, in a courtroom inside of a country who has occupied my country. You can arrest all Saharawi's; it will never change my beliefs. Morocco has occupied Western Sahara for over 40 years, and I will always refer to you as an occupier.

The presiding judge asked him to take politics out of the room. Thalil answered that "you're only president in this room; in this room I will respect you, but the only leader I know is Brahim Ghali in Polisario Front". Thalil explained how he was detained together with Bachir El Khadda and Hassan Dah on December 5th in 2010. Dozens of policemen's surrounded the café, and one asked in Hassaniya "where is Thalil?", and when he answered he got a bag over his head and was placed in handcuffs. They hit us in the car, and they pulled out my nails. He told, that when interrogated, they asked him if he was arrested in 'Guerguerat', where Thalil pointed towards the preceding judge and said; "you know where that is! Its where the Moroccans fled from the Polisario Front". Thalil complained on the translator numerous times, and claimed that he did not trust the translator, as he is Moroccan.

He claimed that he was never asked about Gdeim Izik when he was questioned and was only questioned about Polisario Front and his trip to Algeria in August 2010, and that he has never read the content of the declarations, which he stated were signed under torture, where the guards had forced his fingers down on a piece of paper. He explained how he came from El Aaiún to Rabat by plane, with a bag over his head whilst handcuffed. He told how the personnel wore masks, and when placed in front of the investigative judge he had denied all the charges.

When the prosecution asked him if he had been arrested before, Thalil stated “this is the third time. They claim that I have done this or that, while my only crime is my fight for self-determination for Western Sahara.” Thalil stated that he has never hurt anyone, and that he has no problem with people, only with the Moroccan regime and the dictator. Thalil furthermore explained that he had traveled with a delegation in august 2010 to Algeria, which had nothing to do with the Gdeim Izik camp. Thalil repeated numerous times that he had never been to the camp, and had nothing to do with it.

When the Civil party commenced their questioning Thalil mimicked that he would not answer, and remained silent.