Ten Norwegians, including the vice-president of Norwegian Labour Youth, was few hours ago deported from South Morocco.
Published 18 January 2016


"The police entered the bus and told that we had to collect all our things. After a while, policemen rushed to the place, they were everywhere", Emilie Bersaas, vice pdesident of Norwegian Labour Youth, told on phone from Morocco.

The incident took place at 0540 this morning in the southern Moroccan town of GUelmim. The AUF vice president sat next to two other Norwegian groups on board the same bus from Agadir driving southwards in direction occupied Western Sahara.

"We asked why, and no one replied. Nor dd they reply who they were. They refused to identify themselves by name", Bersaas told on phone from Morocco.

The Norwegians explained they had no place in Agadir to stay, by the police said that was irrelevant.

"God has said you cannot travel further", was the final answer from the police, Bersaas told the Support Committee.

Now, her group is driving in a car northwards direction Agadr, where they are expected to arrive at one point this afternoon. 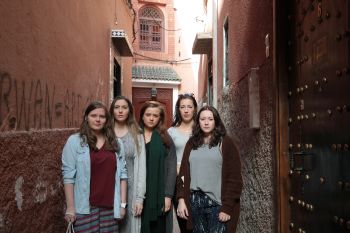 Bersaas was accompanied by a group of five people from Western Norway: Natalie Milde who is deputy city councellor in Bergen and in the international committee of the Labour Party of Hordaland, Vilde Stokken youth councellor of the Norwegian Trade Union Congress of Hordaland, Beathe Sognnes from the youth council in Hordaland region of the Trade Union Congress of Norway, as well as Kristin Hustrulid og Rikke With Bergseth. Photo to the right: the five latter travellers.

Also to representative of the Socialist Left Party were on the same bus, and faced the same consequence: Helga Hustveit og Kai Arne Hustveit.

In addition, Helle Lohnås Engeset and Casper Johansen were expelled.

Different groups travelling to Western Sahara have received different explanations from police over the course of the last 24 hours: Due to street fighting, due to terrorism, of confidential reasons only the police know, becase the vehicules are lacking permissions to drive so far south, because one can get lost in the small city of El Aaiun, because it is more pleasant in Agadir, because Morocco does not allow political visits, because new rules have been introduced and because it is forbidden.

The divine reason that the Labour Youth VP received has not been reported before.

Western Sahara is the last coloby in Africa, according to the UN. The people of the territory is awaiting a referendum that the UN has promised them.

Click on th images for high resolutions. Can be used freely. Pictures of Bersaas were taken in Western Sahara's refugee camps i Algeria a week ago, and to be credited AUF/Kristoffer Klunk. 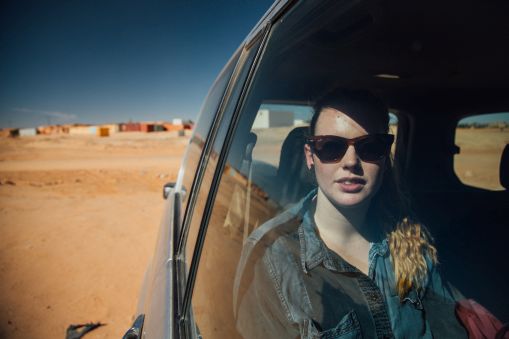