Margit Fausko (22) and Martin Ellingsen (20) were at 14:00 European time stopped by Moroccan police at a control post, and deported from occupied Western Sahara.

The two were going to meet a Saharawi journalist in the occupied territory of Western Sahara, that was recently put in jail for six months for his activities. The aim of the visit was to learn more about the management of fisheries in occupied Western Sahara.

"We were at the check point for about an hour. After a while, two other Norwegians joined us. After half an hour they said clearly that we were not here for tourism, and that we had to return to Agadir, says Ellingsen on the phone to the Norwegian Support Committee.

Just before, two other students who went to the beach to take pictures outside the capital were picked up by police. The two are Norwegian Mali Røsseth and Polish Dagmara Wojtanowicz, both students at an art school in Norway.

"We asked for an explanation for the deportation but they refused, says Ellingsen of the Support Committee.

Ellingsen and Fausko both serve on the board of Green Youth, in the Oppland South Trondelag regions respectively.

This is the fourth Norwegian group to be arrested today by Moroccan police on their way to the capital of Western Sahara, El Aaiun. Earlier today, nine Norwegian students were deported.

Last year, the Congress of the Norwegian Green Youth, adopted a strong position on the conflict. The party is particularly critical of the EUs cooperation with Morocco on fisheries in the occupied territories, which is in violation of international law. 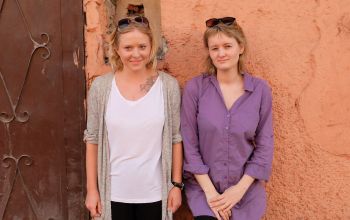