The Norwegian Support Committee for Western Sahara is 20 years old this week. 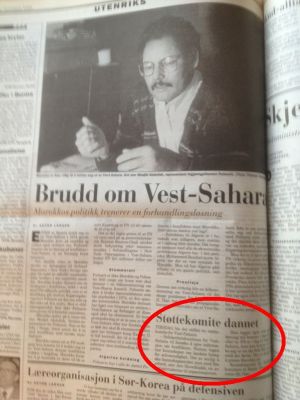 1.november 1993, twenty years ago, three young men were sitting in a flat in Oslo and decided to form a support group for Western Sahara. One of them, Ronny Hansen, had been following the situation in Western Sahara by reading Spanish newspapers. He had met representatives from the freedom movement Polisario, and in 1992 he went to the refugee camps in Algeria. He became even more concerned about the conflict, and came back wishing that other people in Norway should become involved too.

"We were sitting there in Oslo wondering who we might call who might want to join our group", said Ronny. At that time, there was already broad support for the East Timor cause, and many of the people who sympathized with that cause also got interested in Western Sahara.

Among those who did, were Hans Morten Haugen at Diakonhjemmet Høgskolet. He underlines that he and the other people in the board helped organising talks, writing feature articles and similar activities, but that Ronny was the driving force during the first years. He earned the suitable nickname Mr. Western Sahara. 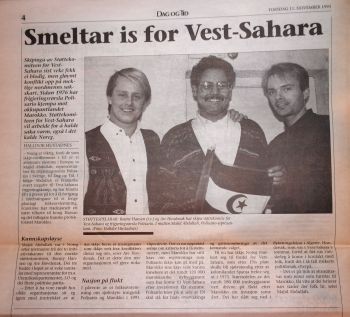 Western Sahara on the map
Ronny tells how in the beginning they focussed on spreading information. He found it particularly important to talk to politicians and decision-makers, and he can now look back upon a very exciting learning time concerning advocacy and press work.

"Now there is far more competition for the politicians' attention. I remember how we fearlessly booked meetings with the minister of foreign affairs, the parliament, leaders of political parties and so on. Maybe we were naively self-confident, but it was easy to make people listen to us. We strongly believed in our message. Our work in the 90-es laid the foundations for the consensus across party lines that we have concerning the Western Sahara conflict in Norway today."

1997 was the year of the first broad campaign for Western Sahara in Norway. The campaign was developed in collaboration with SAIH (Norwegian Students' and Academics' International Assistance Fund), and the close cooperation with this organisation continues up to this day. The Support Committee and SAIH SOLAK-campaign of 1997 made students from the whole country involved. 150 students showed up at the University of Oslo to attend a Western Sahara associated to the campaign. A Polisario flag was raised at the university campus.

A new attention peak for Western Sahara came in 2002 when the Rafto Prize was awarded to the Saharawi human rights activist Mohammed Daddach. Ronny also points out the Support Committee's struggle for support for the refugee camps. Norwegian People's Aid and Norwegian Church Aid eventually became involved after talking to the Support Committee and their Saharawi friends.

"The Support Committee has all along been in close contact with Saharawis. In the beginning people connected to Polisario were invited to Norway. Later different people have also been invited. This has been important in order to tell people about the situation", according to Ronny.

He continues by telling that in the 90-es information about what was happening in the occupied territories was scarce. This has changed now, after Internet has made information more available. Today we also talk about violations of human rights. Earlier the focus was almost exclusively on the right of self determination and the humanitarian situation in the refugee camps. 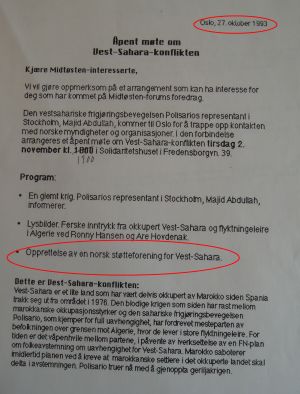 Important victories
When asked what were the Support Committee's most important successes during its 20 years of existence, both Ronny and the current director since 2011 Erik Hagen the work of stopping Morocco's plundering of the natural resources in the occupied Western Sahara.

"The Support Committee has been successful where other solidarity groups have failed. We have renewed ourselves and kept ourselves updated. Among other things, we were early in mapping the connections between the occupation of Western Sahara and businesses, including Norwegian companies. This was essential to keep people at home involved", says Ronny, and alludes to among other the TGS-Nopec-campaign of 2002. 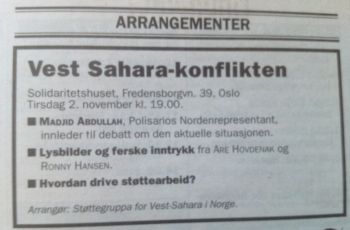 The road ahead
The Support Committee's economy and number of members have steadily grown over the last few years, and the organization is receiving a growing number of requests from different groups who want to know more about Western Sahara.

"Something I find amusing is that while earlier the Support Committee was responsible for most of the Western Sahara events in Norway, now there is a lot of other organisations who are involved and do things on their own. We almost can't keep up with all the requests", says Erik.

"The Support Committee is on a good track", says Erik. For the last three years it has been possible to have a person in a full-time position. More members are a good way to secure a healthy operation environment for the organisation. And so, more members is what we would like as a birthday gift!

See how to support us here.