The eight political youth parties of region of Hordaland, Norway, together organised a full day conference on Western Sahara at the University of Bergen.
Published 16 April 2012 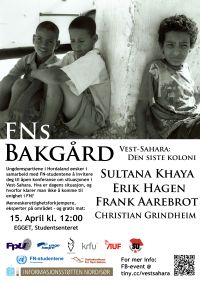 The conference "Western Sahara: the UN's backyard" was on Sunday 15 April organised at the University of Bergen, Norway. Main speaker was the Saharawi human rights activist Sultana Khaya, who told about the human rights violations in the territory.

The speakers of the conference particularly highligted the possibilities that the Norwegian government has to put pressure on the UN Security Council so that the UN operation in the territory can report on the human rights violations in the territory.

The other speakers were Kai Grieg at the UN Association West, Erik Hagen from the Norwegian Support Committee for Western Sahara, and Christian Grindheim, master student in history at University of Oslo.